Professionals often use LED grow lights to produce vegetables and fruits that are out of season and to give plantlets a head start in extreme weather conditions.

For some, this is a hobby to produce unusual house designs, and for others it is a teaching tool.

Getting your grow lights perfectly right can be a tricky business. Bear in mind that these indoor lights are used to substitute direct sunlight.

Not just any light will perform as well as a good grow light. The way plants utilize light, and the effect it has on human eyes varies significantly. The human eye may not be affected much by the color of light, but plants are very much affected by light.

If you have a 3 x 3 space for growing cannabis for instance, and you are simply tired of the exhaustive electric bills, you already incur, plus the heat produced by your present HID lamps, then you will love the new VIPARSPECTRA PA600 LED grow light panels.

This LED grow light, which is rated at 600W, uses less than half of that power when working. The only time the VIPARSPECTRA PA600 gets to 600W is when it is operating at full power. The LED panel uses precisely 285W of power.

So that might give rise to a likely question, “how many watts do you need for the best yield?

Lights are the most important factor for plants to develop, so it is right that we take some time to study them.

However, when it comes to LED grow lights, the wattage is not very important. The law of the use of wattage to determine the sufficient lighting for a given growing area was formulated based on the system of the HPS and HID grow lights. 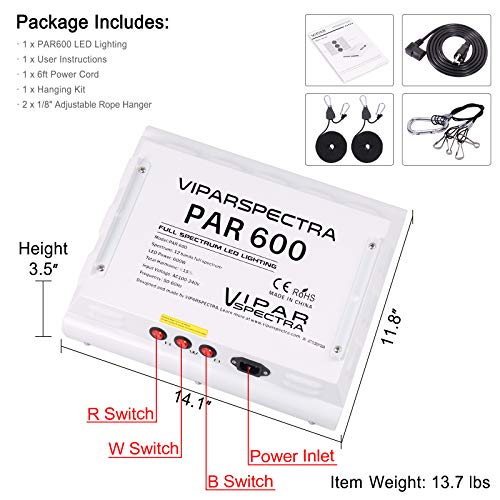 This being put in place, the only number that will determine your plant's well-being is the true power and not the equivalent.

For LED grow lights, you need an average of 32 watts per square feet for efficiently growing plants (cannabis), and this is the wattage that is used during flowering. When it gets to the vegetative stage, you may need to cut this power in half.

Frankly, there are many different types of grow lights in the market, both LED and non-LED panels.

If you own or have used both, you can’t deny that there are differences between non-LED grow lights or other LED panels and the VIPARSPECTRA PAR600. 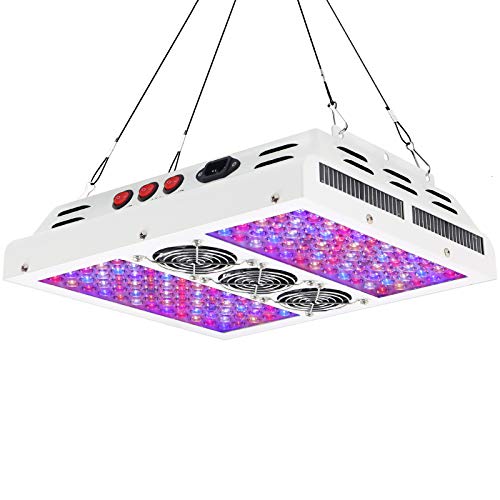 This PAR600 is an upgraded model of the VIPARSPECTRA series and is now mounted with three switches that give users a better control and use of the spectrum. As an additional upgrade, the PAR600 now has a second optical lens, which increases the light's penetration through the canopy.  Also, this model has updated aluminum heat sinks and cooling fans, which are now at the bottom of the LED panel.

The exhaust vents on the upper part of the panel are outlets for heat as the fans draw air from the plant area through the lights and then out through those vents.

A good grow light should reach at least 600umol, and those are exceptionally perfect for growing cannabis.

When placed at the height of two feet suspension from the plants, the PAR600’s rating in the center under the lights reaches 680, covers a 1" by 1" area, and is rated at 425umol or more. 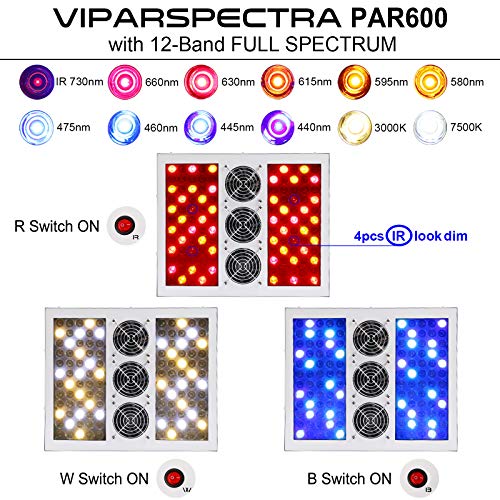 VIPARSPECTRA PAR600 VS OTHER HID LAMPS

Experienced growers who have used fluorescent lights will tell you that these fluorescents need an extra ballast to keep them from flickering. They also need a red lamp to support their plants’ boom.

Due to the extra heat that emanates from the HID lamps, owners often use extra ballast and increased ventilation to put the heat produced by the bulbs in check.

With the VIPARSPECTRA PAR600 LED grow light, users may never need to replace the bulbs, because they last for almost 100,000 hours. There is also no need for extra ballast, and the lights are often cooler than the ones originated by HID lamps. 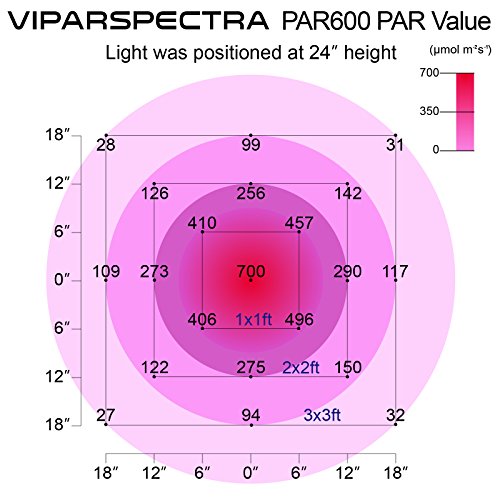 The fans run noiselessly, and they efficiently keep the light cool.

Renowned manufacturers Epiled and Bridgelux make the 120pcs of 5 Watts LED bulbs that are used in this grow light. The LED bulbs are attached in a way that focuses their light directly on the plants, thereby forming an angle of 90º with the horizontal.

Unlike HID lamps, the VIPARSPECTRA PAR600, like every other LED grow light does not generally burn leaves, but it may when hung too close to the plant. It is advisable to adhere strictly to the manufacturer’s guide on this for the best results.

Coming from the stables of VIPARSPECTRA, the PAR600 is a product that has lived up to its name in the indoors planting industry.

It is about one of the most important LED grow light panel in the VIPRASPECTRA series. It is an upgraded quality and is the future of grow lights.

Due to its low power draw, the VIPARSPECTRA PAR600 ensures that it runs at a drastically reduced cost thereby saving energy while still giving your plants their requirements to fill them with resin and develop large leaves.

Most of us don’t have a whole room to devote to indoors planting. Some of us are either lucky to have a grow tent (grow cabinet) or cabinet growers.

Whatever you are growing in, your best choice should be LED grow lights for the following reasons: