The first time I heard the MarsHydro Reflector 96 LED grow lights was a couple of years ago. Back then I read an article how LED grow lights were the much better at growing marijuana than HPS bulbs. I became interested in trying them for my plants. Check out our review of the best led grow lights and grow tents.

The market was offered a variety of product including fluorescent lights, LEDs, and HIDs (high-intensity discharge lights). Unfortunately, the first few products I tried were HIDs that simply did not do the trick, they had heating issues, and lost their intensity over time. I soon realized that HID light was more of a headache and that I needed something better.

It was then that I started looking at various LED grow lights out there. Needless to say, most of them did not perform as well as I would have liked. Either they were too narrow in terms of the spectrum range or they simply did not come with any certifications or warranties to give me a peace of mind.

Also, the market had been flooded with cheap knock-offs that promised a lot of features, but did not actually offer quality. I was about to give up on using grow lights altogether. 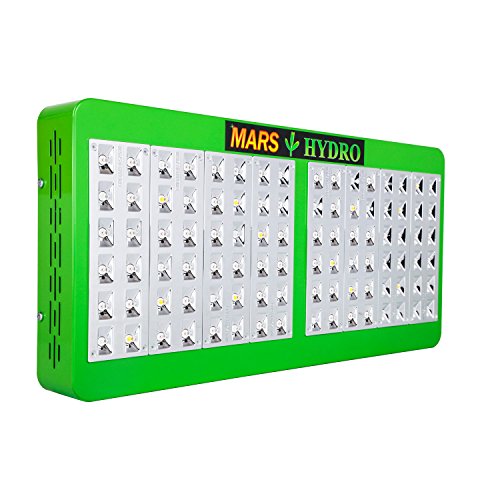 Still, I decided to give this technology one last chance. Having burnt my fingers a few times with other grow light products, I was determined to thoroughly understand grow lights before spending another penny. While comparing products, Looking at the spectrum range, color temperature, and cooling solutions provided by various products.

I then looked at the overall reviews and ratings to know what others thought about the products. I also wanted to make sure that I got the best bang for my buck, so I compared energy consumption for different products as well.

When I looked at all of the above factors and did a detailed comparison, MarsHydro Reflector 96 turned out to be the best among the best on all criteria.

In fact, I now believe that it is hands down the best product of its kind. I bought two of these to get started. I used the first one in my closet where I have been trying to grow marijuana myself. The grow light was kept about 2 feet above the plants and I set a timer so as to turn the light on and off on regular intervals.

After purchasing a grow tent I placed the other MarsHydro Reflector 96 grow light in my spare bedroom where again I kept the same plants (for ease of comparison). I kept the second grow light on continuously. I ran this experiment for two weeks and noted my observations.

​The plants grew really well. The marijuana grew quite well and produced really stinky marijuana buds during the flowering stage. They grew thicker than when I had tried to grow them using HIDs earlier. 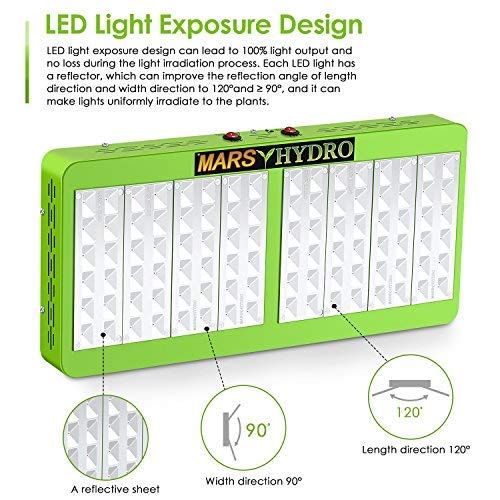 The marijuana that I grew were of the skunk variety which are supposed to complete their bloom cycle in 7 weeks. By the end of week two, I could already see buds growing denser than I had ever seen before.

Needless to say, I was quite happy with the results. I used the timer not only to find out how well plants grow but also to find out if the lights could handle changes in power supply, fluctuations, etc.

Of course, LEDs in general last forever, so it wasn't surprising that the grow lights survived this test. I had used halogen grow lights earlier and they stopped working out of the blue simply because of a power fluctuation.​

Next, I looked at the greenhouse light. I ran it continuously because the MarsHydro Reflector 96 product description recommended that I run it for up to 18 hours. I wanted to test this limit. It also promised a lifespan of 50000 hours. We clearly couldn't test, but I did try to push the product to its limit. Also, it helped me test the product for heating issues that I had faced earlier with HIDs.

So, I was pleasantly when they worked just as well after two weeks of running continuously, without break. There were no heating issues. The grow light's designed well enough to dissipate heat continuously, so it ran much cooler than HID grow lights.

Another thing that I noticed was that even though I ran it continuously, it did not damage the plants in any way. I had read somewhere that certain HIDs give light burn. So, I wasn't sure if these LED grow lights would do the same.

​Another thing that I noticed was that even though I ran it continuously, it did not damage the plants in any way. I had read somewhere that certain HIDs give light burn. So, I wasn't sure if these LED grow lights would do the same.

​Fortunately, they did nothing of the sort and my plants were safe even after two weeks of continuous use. Although, I did notice that the ones in the basement seemed to do better in terms of growth, probably because plants also need some time without direct light.

I also used my lux meter as well as a PAR meter I had borrowed from a friend. If you don't know the different between Lux and PAR, here is the difference in simple terms: Lux measures the spectrum of light visible to the human eye, whereas PAR (Photosynthetically Active Radiation) measures the spectrum of light relevant to plants which may be beyond what is visible to the human eye.

I used both measuring devices- the lux meter and PAR meter- because the product claimed to have a full spectrum coverage. On the lux meter, I was able to measure 400 nm to 700 nm, which is the visible spectrum.

I then used the PAR meter as well as compared the numbers provided by the manufacturer.

They matched exactly. So, it delivered on what it promised in terms of full spectrum coverage. I had measured the same thing with other LED products and HID grow lights.

The product that even came close to this kind of a coverage was one that covered from 450nm to 650nm, which wasn't even the full visible spectrum, let alone the full PAR spectral range.

Additionally, it comes with 10 different bands which come in handy when customizing the spectrum according to a particular plant species. The flexibility that this spectrum switching feature gives is unique to this product and makes it far superior to its competitors that generally provide only red, blue, or green lights.

In order to measure efficiency, I noted the power usage in the grow tent, because it allowed me to isolate the grow light's usage. Also, continuous usage meant that I could measure time easily.

This impressed me way more than all of the other factors because power consumption and energy efficiency were one of my major concerns. 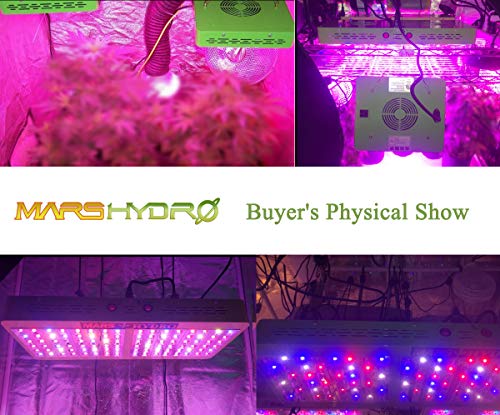 Also, the product comes with a 2-year warranty, which means, unlike some other products I can actually go back and get the lights replaced. Additionally, it comes with an ETL certificate which means it has been independently tested, and that it meets all safety and quality requirements.

Finally, I called their contacted their customer support as well because I couldn't find out some information from the product description. They replied within hours, which reassured me that I wasn't dealing with some inefficient company. I think customer service is just as important as product features.

Finally, the build quality of this product is much better than some other lights that I received. Even though it is not waterproof, but it is hardy and can survive occasional bumps well. It is also big enough to cover a number of plants from a height of 2 to 3 feet, and yet it is small and light enough that it can be shifted from one location to another without much effort. The form factor for the MarsHydro Reflector 96 is quite modern and elegant.

I would be remiss if I don't mention the pros and cons of the MarsHydro Reflector 96 Led Grow Light.​

​Other than the above two cons, I couldn't come up with too many. Although, there are some best practices I would recommend if you are planning on buying these lights and using them effectively:

1. Buy and use LED protective goggles (also known as LED grow room glasses) and do not, under any circumstances, look at the lights directly without protective eye wear.

2. Use a timer so as to ensure that only adequate amount of energy is used. Even though LEDs are energy efficient and have a life span of 50,000 to 100,000 you should use them in a planned manner to prolong product life.

4. Research has shown that it is best to use a mix of different colors for most plants so as to mimic sunlight. If you don't know the exact spectrum range for a plant, it is best to use the generic visible light.

5. Use the light according to the kind of plant you have and the stage it is in. The product has a switch that can help you go from vegetative mode to bloom mode. Use it as per your requirements.

We specialize in reviewing the best LED grow lights and are unable to provide everything related to marijuana cultivation. Below are a few links to several blogs and government sites.

I believe that if you follow the above recommendations, you'll be able to obtain the best use out of this amazing product. It is light weight, yet solidly built. I also love the fact that it comes with different modes and features that provide me the flexibility to change lighting according to the plant growing stage.

Additionally, the fact that it provides the best PAR output per watt is the best feature because energy efficiency is a major concern when using such products. Finally, the design aided heat dissipation makes it a better product than the HID lights as well as other LED grow lights.

Again, having compared and tried a lot of grow lights I can safely state that this is the best product of its kind in the market today. So, try the MarsHydro Reflector 96 LED grow lights today!​