Every grower out there is constantly looking out for upgrades and better equipment to have even more success than before.

LED grow lights are a necessary tool to grow your favorite strain of cannabis indoors, and it's always a good idea to invest in a quality LED grow light.

Since they have an important factor in the indoor growing process, it's important to keep up to date with the latest technology. Most known brands usually have new lineups each year that bigger and better than the previous year.

Once you find the perfect LED grow light for your plants, most likely you will want to stick with the manufacturer who made it. Thanks to the lineups from popular brands, you will always get to upgrade the exact model with a better version.

And today I will review the Black Dog LED PhytoMAX 2 new lineup.

It's been a few years since Black Dog LED has made any updates to their lineup. However, the new PhytoMAX 2 lineup was really worth to wait for.

They have updated the whole lineup and the LED grow light models are now boasting 60% more light than previous models thanks to the larger light output than before. New models also have maximum footprint size increased.

The best thing about the lineup is that it's already out so no pre-orders are needed to grab one of the newest Black Dog LED models. The lineup was released at the beginning of 2017, and probably will last a few years again until the Black Dog LED updates the lineup once again. They are a really good choice for any grower out there, even for the beginners, as they keep up with the technology and they constantly find new ways to make LED grow lights as efficient as possible and they tend to keep the whole process simple.

To guarantee the quality they produce, you will have the 90-day money back guarantee, and you will be covered with the limited-time warranty on any model from their PhytoMAX 2 lineup. Also, their support will always be available for you no matter what's the reason.

The new Black Dog LED lineup has 5 different models, which are different because of the output power. The 5 models are available in 200W, 400W, 600W, 800W, and 1000W output power. It's really great that they offer a different output for each model since there are growers with different plants and different processes of growth. It's easy to choose which model will work the best for you. 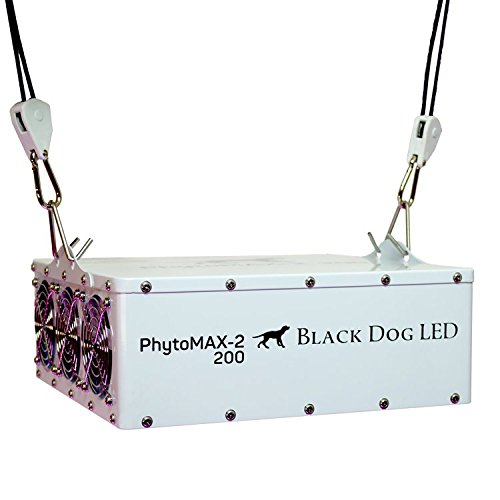 It's made in the USA which only adds to the quality technology and materials used to make it.

It's the smallest model and it has 3 fans which are more than enough to transfer the heat away from the LED grow light unit.

It has an incredible coverage and results while it doesn't require much of electricity at all. For most growers, this is the crucial point for them in deciding whether they will purchase the model or not.

Large footprint within the new models is up to 9 square feet which is a huge difference than previous models. It's also been proven by the independent spectroradiometer testing.

The new lineup models offer the most efficient spectrum for growing your favorite plants and flowers, which is based on the last 6 years of making and testing the Black Dog LED products.

You will also get the quick start guide which makes the PhytoMAX 2 lineup great even for the beginner growers out there. Customers only had nice words to say about the Black Dog LED 200W model.

It actually grows plants and flowers faster than the sun does, thanks to the 60% more light than in previous models. 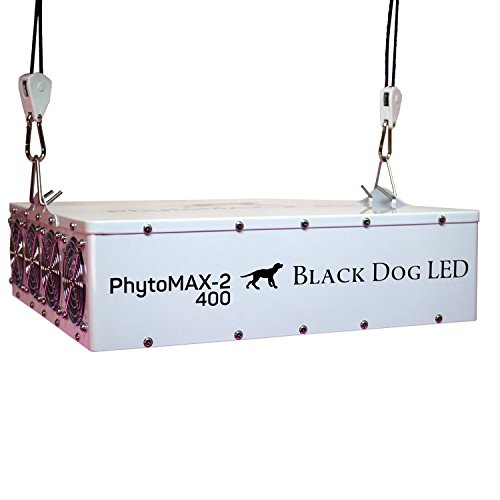 The more output the model has, it is also bigger in size, so that's something you should pay attention to.

Bigger models will have more fans for the better cooling. 400 LED grow light has 4 fans at the side which helps keep the heat away from the LED bulbs.

It's also a great factor to follow in order to find out which model is the right one for your indoor growing process.

PhytoMAX-2 400 covers up to 18 square feet of flowering footprint coverage. It's made to use 35% less electricity.

The interesting fact is that the newer lineup isn't more expensive than the older lineup. Actually, you might be able to find the newer lineup for cheaper, however, it all depends on the store you plan to purchase it from.

Black Dog LED lights are that good, that your plants might even overgrow the plant area, so I would always recommend you to maybe skip the 200 model and go for 400 model or larger if needed.

In my opinion, it's always better to invest in a better light than have to pile up cheaper budget lights. You can't miss by going for any of the models from the PhytoMax-2 lineup.

It offers a full spectrum of light which will penetrate your plants to reach even the leaves at the bottom, and make them grow as good as the top.

Also, keep in mind that the bigger the model number is, the bigger the price will be. However, in my mind, Black Dog LED lights are really worth the price because you will be able to grow your plants the best possible without any problems at all. 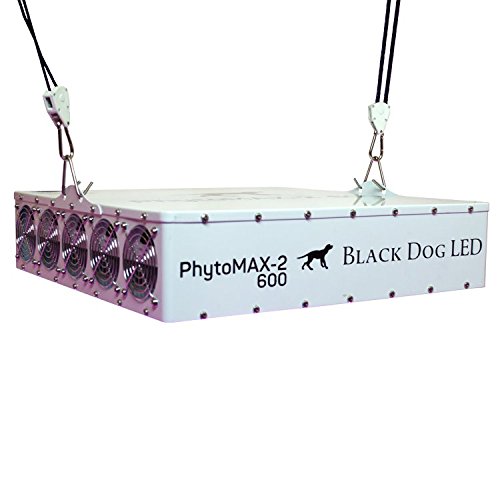 It has the ability to cover 25 square feet of a flowering footprint. It's proven by the independent PAR Meter testing, and there are no hot spots at all.

252 LEDs will make sure that your plants get better quality light than the natural light, which is why the plants grow faster and better under the Black Dog LED grow lights.

Even the larger models are good for beginner growers since you will be provided by the "Maximum Yields - The Dirt Simple Guide To Using Led Grow Lights" which will make the indoor growing process easier even for people who don't have a lot of experience.

With the quality Black Dog LEG grow lights, you will be able to achieve and get higher quality flowers and more trichomes. Incredible grow results are proven by both users and through the various tests.

PhytoMAX-2 600 model is right in the middle, which most likely will suit most of the growers out there, however, there are always smaller or bigger models to suit your plant area. 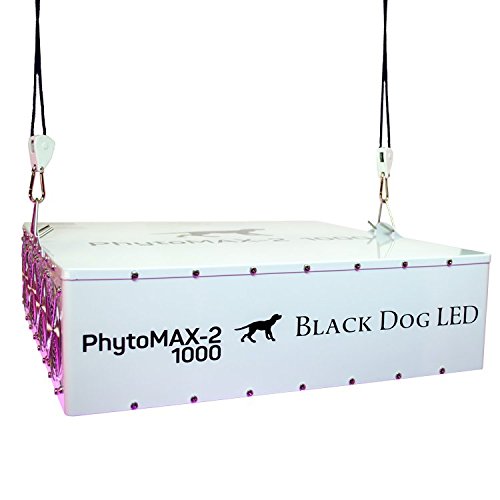 Black Dog LED PhytoMAX-2 1000 Grow Light is the last but not the least important model of the PhytoMAX-2 lineup.

It's worth mentioning that the smaller models have 3, 4 or even 5 fans to keep the LED grow lights cool, while the bigger models have only fans but they're bigger. Due to the bigger LED grow light model, Black Dog LED were able to put bigger fans to cool the unit down. It's the size that matters, not the quantity.

Black Dog LED produces one of the most powerful and updated LED grow lights, which are largely researched, tested and proven footprints.

It might be on the pricey side, but at least you know you are buying the quality LED grow light which is made in the USA, and you will be covered with the limited-warranty. Also, if you aren't satisfied or you experience a problem during the first 90 days, you will be able to return it and get your money back.

What's in the Box If your light requires cleaning:

Best Warranty in the Industry

Black Dog LED has one of the best and longest warranties in the industry. For the first 3 years they will repair or replace the LED panel. Between 3-5 years Black Dog LED will repair the panel for the cost of labour and will not charge for the parts. After 5 years you would be responsible for all costs associated with the repair.

If you are unsatisfied with any Black Dog LED light, you can return it for a refund within 90 days from the original purchase date. A Return Merchandise Authorization (RMA) must be requested and the product shipped within 90 days of the original date of receipt. Returns are limited to one (1) light per customer. All items must be returned in "as new" condition in the original packaging and include all accessories.

Black Dog LED really understands the needs of cannabis growers, and they work hard and they experiment with the latest technology in order to design and create the best possible LED grow lights on the market.

The newest PhytoMAX-2 lineup available on Amazon will provide you the full spectrum of light, from 365 to 750nm. It will also save on your electricity bill as it saves up to 30% energy than previous models. Not to mention the 60% better light which will help you to grow cannabis faster and better than using a natural light.

They might be on the pricey side, however, they are really worth it no matter if you are a beginner or advanced grower. You will be provided with the manual and a book which will help you understand the process and how to achieve the best results possible. It's a great fit for both beginners and advanced growers.

If you are on a budget, I would recommend you to save some money for the desired model out of the new lineup, as you will save your time and you will avoid any troubles.

What do you think of the Black Dog LED PhytoMAX-2 new lineup?

Let me know your opinion and experience with the previous models in the comments down below!